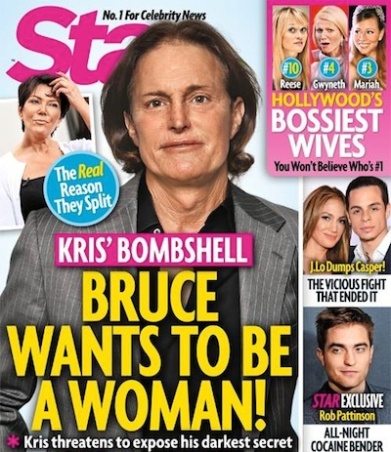 That spicy vampire who spends his few allotted hours off the Kardashian leash constructing toy helicopters and giving motivational speeches insists he isn’t becoming a woman despite rocking a ponytail and contemplating a Laryngeal Shave following his separation announcement from Kris Jenner.

When TMZ caught wind of a rumor that the elder lesbianic Jenner was considering getting his Adam’s Apple sawed off, Bruce confirmed the tale but specified that he is NOT undergoing getting gender reassignment. His exact words: “I just never liked my trachea.”

If he’s not becoming a woman I don’t want to be one anymore. Everyone show solidarity and support by mailing Bruce one high heel and one tube of Ruby Woo lipstick.

Uh oh, looks like we have a repeat of the K-Stew/Rupert Sanders debacle. This time, it’s Smash director Michael Morris in hot water after photos of him kissing the show’s star, American Idol runner-up Katherine McPhee, were posted to TMZ.

Morris has been married to actress and frequent Howard Stern and Chelsea Handler guest Mary McCormack since 2003. It gets worse, Michael and Mary have three daughters together, and the youngest is only two. McPhee, 29, is also still technically married (“separated”) to some lesser-known, older producer.

Word has it, Morris was kicked out of the house by his wifey for not-lifey after he realized TMZ had obtained proof of the affair and confessed.

I wonder if Eric the Midget is considering catching a balloon to L.A. for a boost into the kissing booth.

Inspired by the seasons of The Sopranos she just watched because she heard about James Gandolfini’s death and thought it was a prequel to Sister Act, Kim Kardashian cracked her shaved knuckles and practiced her skills as an accomplished and menacing mob boss on her friends.

In an attempt to weed out the rats, Kim sent fake photos of her and Kanye’s brand new baby North West to a select group of peers and acquaintances.

The snitches apparently weren’t afraid enough of getting stitches. From TMZ:  END_OF_DOCUMENT_TOKEN_TO_BE_REPLACED

TMZ’s choice to let Tara Reid host their television show this week paid off. As soon as the topic of Lindsay Lohan getting her car towed came up, Tara, an expert in train wrecks, called out Lindsay’s behavior.

“She should just stop driving,” Reid said, later explaining that they don’t get along because Lindsay is a “mean drunk” who crashed her friend’s car. Apparently, one of the few times they did hang out, Lindsay rubbed Reid’s vodka watermelons the wrong way by drowning innocent cell phones.

“She’s so paranoid … anytime she thinks someone has a camera phone on, she drops it in the ice bucket.” 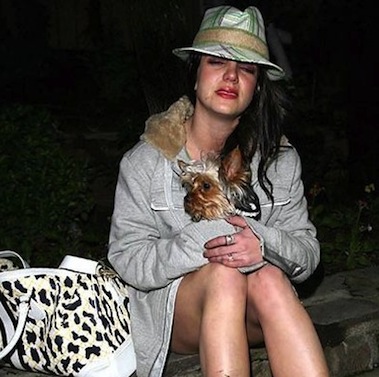 Britney just can’t escape her past. Like fatty skin rising from chicken broth, new allegations from her 2008 melt down surfaces.

In new court reports, the X Factor judge’s former manager and ingrown pubic hair Sam Lufti claims he tried to rescue the pop star from drugs, saying she was addicted to crystal meth and took 30 prescription pills when she was put on an involuntary psychiatric hold.

These allegations hit the tabloids this week because Lufti is suing Britney Spears and her family for defamation and breach of contract.

Britney’s mom wrote a book Through the Storm: A Real Story of Fame and Family in a Tabloid World, where she “lied” and said Lufti was drugging and isolating Britney.  END_OF_DOCUMENT_TOKEN_TO_BE_REPLACED 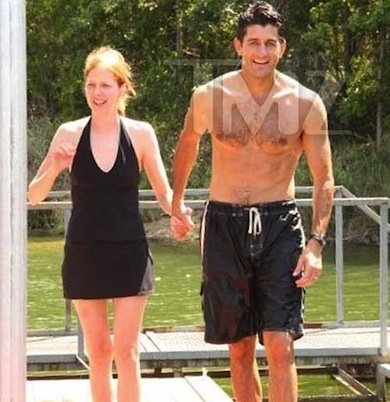 I know you’ve been Googling “Paul Ryan shirtless” every single day since Mitt Romney named the relatively young Republican his running mate. I also know why, at least if you’re a democrat. Forbidden fruit.

You feel guilty that you find Paul Ryan kind of attractive because you know his debt-cutting spiel is unrealistic, possibly even bogus.

Also, representing the darker side of politics, he likely does not support anything you believe in – Planned Parenthood, abortion, health care, lower taxes, gay rights, etc.

Your heart is torn, and cannot help believing in the simplicity of charm and natural good looks, even if they belong to that horrible dog abuser’s choice for Vice President.  END_OF_DOCUMENT_TOKEN_TO_BE_REPLACED

Howard Stern pointed out on his radio show Thursday morning that Kristin Chenoweth (Glee, GCB, Wicked) received a surprising amount of hate comments on TMZ after she was rushed to hospital for head injuries obtained while guest starring on The Good Wife.

One person said “LUCKY THE BITCH IS SHORT… SHE DIDN’T HAVE FAR TO FALL!” while another wrote “I hope her boobs are okay.” How sweet.

The third worst was “Unfortunately, the size of her head is partially to blame” right after the short bitch remark and:

END_OF_DOCUMENT_TOKEN_TO_BE_REPLACED 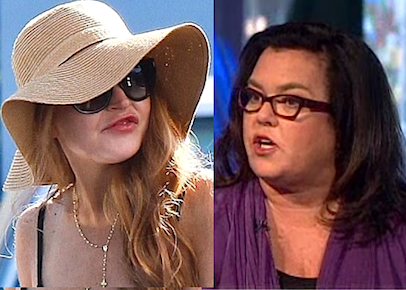 Talk about the pot calling the kettle black, Michael Lohan lashed out at Rosie O’Donnell after she called Lindsay Lohan unfit to portray Elizabeth Taylor in the new Lifetime movie Liz & Dick.

Nate Dogg, the West Coast rapper who died from multiple stroke complications at age 41, has a sex tape that some people may want to see but absolutely nobody wants to buy.

I think it’s too recent of a death (Nate Dwayne Hale passed away on March 15, 2011) and not quite big enough of a star for people to be able to disconnect from the fact that they’re watching a dead celebrity during an intimate moment.

TMZ has learned that the video is five minutes long with Luther Vandross playing in the background to set the mood.

The MaSheen called TMZ on Thursday and either said how he really feels about Ashton Kutcher on Two And A Half Men or what he knows to say because he’s in an attention-seeking crackpipe mood.

He says he’s “tired of lying.” His exact words “I’m tired of pretending Ashton doesn’t suck.” He also says he’s sick of acting like the show itself doesn’t suck.

My question is why didn’t he realize that in 2003 when Two Forgotten 80s Stars And A Fat Troublemaker Started? Come on Charlie, you know it was never worth anything but those outstanding sound mixing and multi-camera picture editing Emmys it repeatedly won. END_OF_DOCUMENT_TOKEN_TO_BE_REPLACED

Michelle Duggar and her family, stars of 19 Kids and Counting, recently suffered a great loss in the form of a miscarriage and it seems that TMZ had no problem posting photos of the child that they obtained from a family member’s Twitter page.

I have heard that holding a funeral service for a stillborn child is the best way to say goodbye and allow yourself to let go, and I agree with that. I just have to question the reasoning behind printing funeral service cards that show pictures of the deceased baby’s hands and feet.

END_OF_DOCUMENT_TOKEN_TO_BE_REPLACED

TMZ is reporting that a scandalous photo of Shaun White at a hotel party is being shopped around to various sources, in hopes of a big payday.

It depicts a naked Shaun White, in bed, on top of a woman with a big grin on his face, looking at the camera. So, it’s not just a nude photo, but a picture of Flying Tomato sex?

There are actually two pics, but one is supposedly of a fully clothed skate/snowboarder making out with the same woman. The photos were taken in 2009 just before he won a gold medal at the Winter X-Games.