Rihanna’s surprise appearance during the Calvin Harris set at Coachella on Sunday  wasn’t the biggest surprise of the day. The award for most shocking went to Tupac Shakur, the long-dead rapper who appeared onstage next to Snoop Dogg for “Hail Mary,” “Come With Me” and “Gangsta Party.”

This was not your run-of-the-mill stand-still hologram. Though there was clearly an unnatural amount of light coming from his body, the movements and voice were realistic, advanced and uncanny.

The image – which addressed fans (“What up, Coachella?”) and disintegrated at the end of the set – came courtesy of Dr. Dre and AV Concepts. Dre also worked closely with Oscar-winning CGI company Digital Domain.  END_OF_DOCUMENT_TOKEN_TO_BE_REPLACED 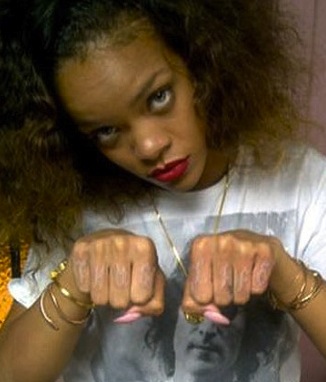 This post about Rihanna‘s new “Thug Life” knuckle tattoo doubles as one of those “stars with no makeup” thingies. She Tweeted the pic yesterday and it was followed by about 20 non-picture messages with mentions of the appropriately hashtagged “Thug Life.”

We all know Rihanna’s not a gangster, no matter how many guns and 2pac tattoos she gets plastered on her adorable baby giraffe body and no matter how many videos she makes in a netted soldier’s helmet singing “I’m so hard” in a non-sexual manner.

Just play along, it’s not hurting anybody. END_OF_DOCUMENT_TOKEN_TO_BE_REPLACED

A sex tape starring legendary rapper Tupac Shakur apparently surfaced online not long after the anniversary of his death. TMZ reports that it was shot in 1991 and depicts a groupie performing oral sex on him at a party.

The owner of the tape, who remains anonymous, has reportedly turned down offers of $150,000, calling them ‘much too low.’ Shakur’s mother Afeni is infuriated and looking to sue anyone who attempts to make a profit off it…

END_OF_DOCUMENT_TOKEN_TO_BE_REPLACED

Exactly 15 years ago on September 13th, 1996, Tupac Shakur, one of the best rappers of all time, passed away at after a drive-by shooting.

He was shot near the Maxim hotel in Las Vegas on September 7th after attending a boxing match featuring Mike Tyson and died of respiratory and heart failure in the hospital on this date. If he were alive, he’d be 40 years old.

According to TMZ, Tupac’s mother Afeni Shakur is spending the anniversary of his death with her friends and family in Northern California. Her rep told the source that ‘it feels like he died yesterday and the pain hasn’t subsided even a little…’